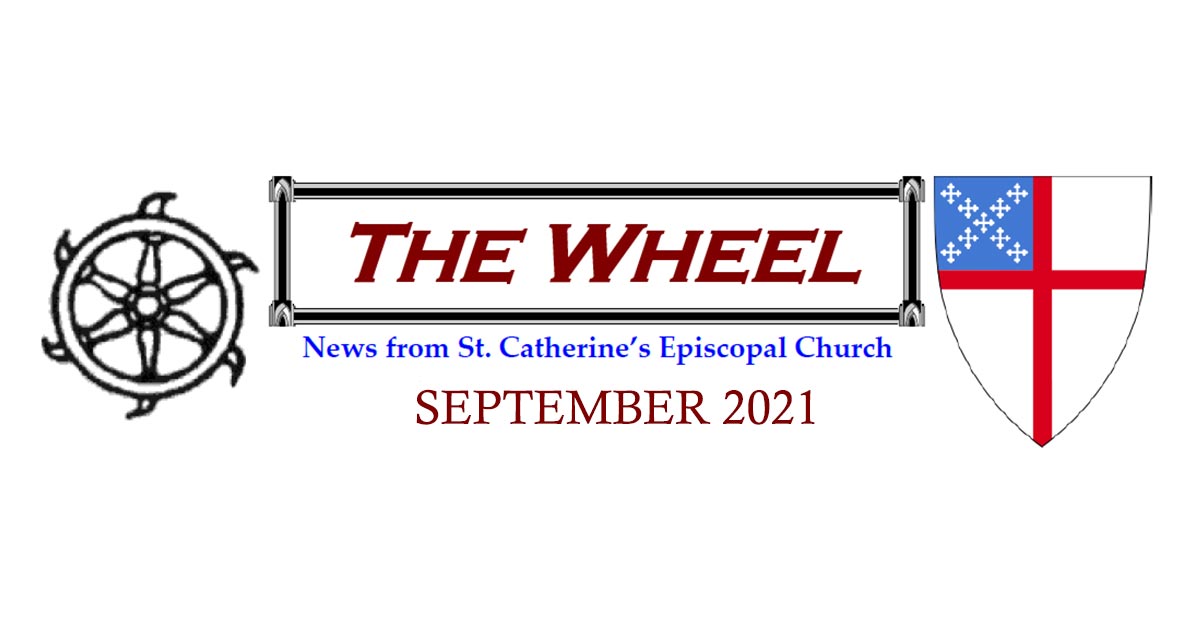 It is a sobering month, this September.  We feel overtaken again by the Covid pandemic.  Schools are in turmoil, more people are being affected by the virus, including members of St. Catherine’s.  Our schools have become battlegrounds over public health policies.  And it seems never ending, this terrible pandemic.

The forces of nature and the darkness of political terror have risen up again to destroy people and communities, in Haiti after the earthquake and in Afghanistan, after the Taliban takeover.  Even to us who shelter in place in relative comfort and safety, these are sobering reminders that the world is often dangerous and dark.

Finally, this month is the twentieth anniversary of that terrible day when suicidal fanatics flew planes into the World Trade Center and the Pentagon and crashed in the field in Pennsylvania.  Twenty years!  An entire generation.  Those who were orphaned on that awful day are now grown up. The rubble is long since removed, the victims of that horrific attack have been long mourned, we have now had three presidents since George Bush was seen reading to schoolchildren while his aide whispered in his ear about the attacks, and Osama Ben Laden is dead and gone.

But, this anniversary stands for us, now and always, as a testimony to the darkest impulses of religious faith.  The worst thing of all, for me, about those attacks, is that God’s name was shouted as the planes crashed.  The terrorists believed that their terrible destruction was an act of the greatest piety.  The trusted that they were pleasing God.

We cannot count the ways in which religious faith has been the justification for brutality, destruction, terror and harm.  Witness the crusades, the enslavement of millions, the discrimination of women, gay and lesbian people, or just people who are different. Civil wars have been fought in America, Ireland, Sri Lanka, and all over the earth, with both sides claiming divine sanction.  It’s enough to make you renounce all faith.

Except, this month we are hearing the Letter of James in our Sunday liturgy, and if ever we needed this “epistle of straw” (as Martin Luther called it), it is now.  James pushed back on the “just believe, baby” brand of Christianity. He said:  show me your faith, don’t just talk about it. And finally, he says what must be said in all times and places, when pretend believers are bellowing about “God” and are inflicting harm and fear on all around them.  James says simply:

Religion that is pure and undefiled before God, the Father

is this:  to care for orphans and widows in their distress.

So, in this sober month, I invite you to return with me to the root of all religion. Let us care for orphans and widows. Let us keep schoolchildren safe.  Let us allow all persons to live in dignity. Let it be our care and vocation to speak peace to all and render the world a place of honor and joy.

With hope in God for all the earth,